Warning: "continue" targeting switch is equivalent to "break". Did you mean to use "continue 2"? in /homepages/43/d336228784/htdocs/PTN2017/wp-includes/pomo/plural-forms.php on line 210
 Alphabet and Facebook develop rival secret drone plans - PingTheNews™

Google and Facebook have significantly expanded their rival plans to develop unmanned aircraft that can provide broadband internet access from high above the Earth, the Guardian has learned.

Both Facebook and Alphabet, Google’s parent company, have quietly registered new drone designs with the US Federal Aviation Administration.

Meanwhile, Alphabet is also planning secret high-altitude airborne operations at Spaceport America in New Mexico, which has been largely unused since Virgin Galactic’s SpaceShipTwo craft crashed in December 2014, and an American subsidiary of Facebook has taken delivery of a prototype solar-powered drone.

Much of the world’s attention is focused on small drones, such as Alphabet’s Project Wing or Amazon’s Prime Air delivery drones, but Google and Facebook are also working on much larger drones that can operate far above passenger jets, and even as high as 90,000 feet.

Flying for weeks or months at a time, such drones could theoretically provide city-sized areas with high-speed internet access, particularly in remote or undeveloped parts of the world.

“We’re working on ways to use drones and satellites to connect the billion people who don’t live in range of existing wireless networks,” said Facebook’s CEO, Mark Zuckerberg, in July. Last year, Facebook set up an initiative with Nokia, Samsung and others called Internet.org to provide some online access to the two-thirds of the world lacking a reliable connection. 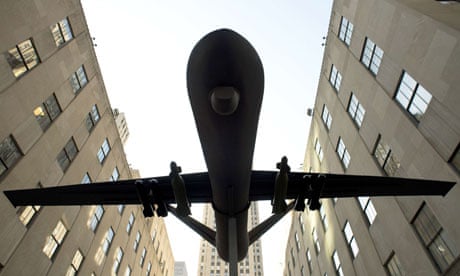 Drones should be banned from private use, says Google’s Eric Schmidt

Both companies would benefit from an expanded internet network which would help them reach new users, and in turn develop new advertising markets.

Over the summer, Facebook revealed a huge solar-powered drone called Aquila with a wingspan of 42 meters capable of operating at up to 90,000ft, sharing internet access with radios and lasers. Aquila was developed by Facebook in the UK. The drone is made from carbon fibre that is about three times stronger than steel and lighter than aluminum. Yael Maguire, head of Facebook’s Connectivity Lab, said in July that the Aquila would weigh around 400kg, allowing it remain aloft for 90 days at a time.

The Guardian has learned that the first and only Aquila prototype arrived in the US in late September, for flight testing later this year. However, registration papers with the FAA show that the aircraft now has a maximum takeoff weight of over 500kg. They also indicate that the Aquila was not delivered to Facebook or Internet.org but instead sold to a recently formed Facebook subsidiary called FCL Tech Inc, for $2m.

“Weight is always your biggest enemy,” said Missy Cummings, professor of aeronautics at Duke University, referring to a traditional challenge of designing aircraft. “Facebook and Google are starting to find out what Boeing and Lockheed Martin have known all along, which is that it is really hard to design these systems.”

FCL Tech Inc also bought another, much smaller drone from Facebook UK in August for $75,000. The SM5 drone has four electric motors like the Aquila but weighs just 12.5kg, suggesting that it may be a scale-model of the Aquila or even intended for another purpose altogether. FCL Tech Inc has been testing digital transmitters that support broadband connectivity at an old navy base near San Francisco, and experimenting with TV “white space” spectrum near Facebook’s headquarters.

Google also recently registered two new drones with the FAA, code named M2 and B3. While there has been speculation that they might be part of Alphabet’s own plans to offer internet access from on high, FAA documents seen by the Guardian show that the drones are tiny. The M2 weighs 2.25kg and the B3 just 900g, about twice as much as a soccer ball.

If people want to fly tacos around on a drone, that’s totally possible

These would be far too small to reach high altitudes but could be used as part of the company’s Project Wing drone delivery project, according to Cummings. “A 900g drone is not going to carry a LCD TV but it could carry small things,” she said. “If people want to fly tacos around on a drone, that’s totally possible.”

Alphabet is still pushing ahead with its internet drone plans though. Last spring, Google acquired Titan Aerospace, a New Mexico startup that had already tested and flown high-altitude solar-powered drones with wingspans of up to 50 meters. Following a crash of one experimental drone in May, Alphabet announced that it was relocating Titan Aerospace to Silicon Valley to join its growing Google Access team. Google Access also includes Project Loon, a plan to deliver wireless internet using unpowered balloons floating through the stratosphere.

However, the Guardian has learned from documents filed with the Federal Communication Commission (FCC) that Google is now planning a return to New Mexico, where it will conduct high-altitude tests at Spaceport America. The tests, which could last until March next year, will involve relaying data between ground stations using aircraft flying at up to 25,000ft, operating on the same 2.5GHz frequencies as 4G LTE cellphone signals.

Alphabet’s tests will be a welcome boost for the glamorous but underused private space facility, which has been virtually mothballed since the Virgin Galactic crash. Alphabet is also running similar airborne tests at a drone range on a Native American reservation in Oregon, and over the Californian coast.

Even if the companies solve the technical challenges of keeping drones aloft for long periods, sharing data via lasers and serving city-sized areas, both Alphabet and Facebook still face regulatory hurdles. Neither company has been granted a waiver to the current FAA blanket ban on the commercial operation of unmanned aircraft.

Alphabet has applied for an exemption, called “333” after a section of the FAA regulations, for its Project Wing delivery drones, but that is yet to be granted and in any case would only clear operation to a maximum height of 400ft. Google has also been testing its delivery drones in the US under a Certificate of Waiver or Authorization (COA) with Nasa, which permitted flights intended to help Nasa develop an automated air traffic control system for low-flying drones. This would not apply to drones flying far above other manned and unmanned aircraft.

“There’s not a lot to run into between 60,000 and 90,000 feet,” says Cummings. “But I’m sure regulators would be deeply suspicious if Google and Facebook were flying these over the US.”

A place for tips, technology, freebies, deals, how-to's, Inspiration and the latest information for Connected Generation.
Previous YouTube added Virtual Reality features to their Android app: a step beyond ‎360° Video
Next World’s first 3D-printed car could cost you $53,000