Warning: "continue" targeting switch is equivalent to "break". Did you mean to use "continue 2"? in /homepages/43/d336228784/htdocs/PTN2017/wp-includes/pomo/plural-forms.php on line 210
 Google Tests New Music Ads - PingTheNews™ 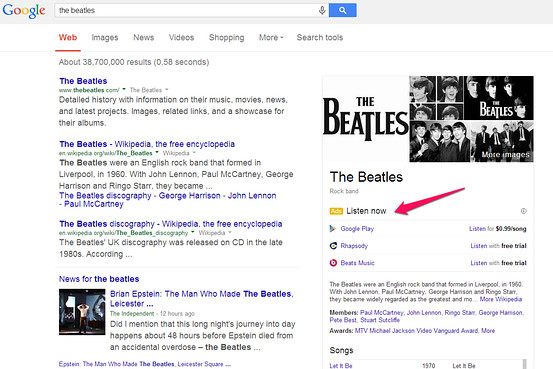 Image of one of Google’s new “Listen Now” ads

Google is testing “Listen Now” ads with Spotify, Rhapsody and Apple‘s AAPL +0.28% Beats Music, the latest in a string of new ad formats that can simplify purchases for consumers.

Search for the name of a musical artist, from “The Beatles” to “Miley Cyrus” to “Camille Saint-Saens,” and Google displays ads – grouped together under the “Listen Now” label — promoting music services, including its own Google Play.

The ads appear in searches on personal computers as well as mobile devices and are performing well for some advertisers, according to one person familiar with the results. Music services previously could have bought similar ads, but the grouping, display and labeling are new.

Two people familiar with the test described it as having started in the past few weeks. A Google spokesman confirmed that the music services pay for each click they get, the same way Google gets paid for its traditional text link ads.

Similar “Watch Now” ads that appear in searches for movies and TV shows were spotted by Search Engine Land in February.

Google is trying similar approaches with other new ads.

Searches for hotels bring up a box with photos, reviews and a widget where users can enter their travel dates. The widget includes “hotel price ads” that pass the dates directly to the site where users can complete a booking, potentially eliminating some steps.

Likewise, Google’s product listing ads display pictures and prices for an item before users click through to a retailer’s website.

A place for tips, technology, freebies, deals, how-to's, Inspiration and the latest information for Connected Generation.
Previous Yahoo teams up with Google on encrypted webmail
Next iPhone is the most secure smart phone with highest level of core security protocols.