Warning: "continue" targeting switch is equivalent to "break". Did you mean to use "continue 2"? in /homepages/43/d336228784/htdocs/PTN2017/wp-includes/pomo/plural-forms.php on line 210
 This DJ App can Stream, Skip, and Scratch Spotify’s 20 Million Song Catalog - PingTheNews™ 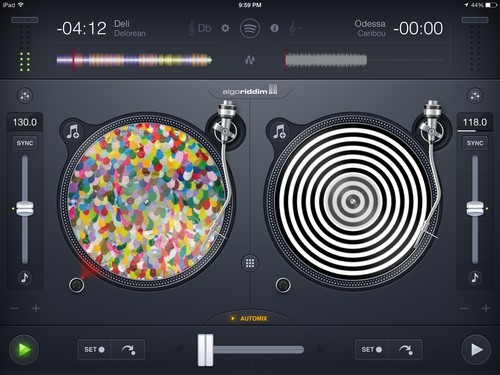 That DJ you hired for your wedding? He may have just become obsolete.

On Thursday morning, the revered Mac and iOS app djay released an update that allows you to simultaneously stream and mix any two tracks at the same time, using Spotify’s streaming service, without any lag.

Previously, djay owners were limited to the songs in their iTunes libraries, which could be both costly and storage-intensive.

“Having access to over 20 million songs is like the Holy Grail for someone who wants to mix music,” Algoriddim CEO Karim Morsy — who has been a DJ himself for 15 years — told Yahoo Tech. “This is the future of DJing. We think it’s a whole new era.”

Djay’s overhaul will also contain a learning algorithm that uses technology from The Echo Nest, a company Spotify recently acquired, to match songs with similar beats. So each time a DJ goes to find a new track to mix with the song that’s playing, he’ll be offered a list of potential matches, based on the beats and genre of the song, and his past listening habits.

You can also hook the app up to an automatic match-and-fade setting and let your iPad or iPhone DJ the party itself.

This bodes well for anyone who’s ever been in charge of the tunes at an event and has found herself in unfamiliar genre territory. Even Morsy reminisces about how he could’ve used the tool back in the day.

“I was DJing parties clubs and weddings and what have you,” he told Yahoo Tech. “Sometimes I couldn’t take on a gig, like a wedding, for example, if they said, ‘OK but the bride is into rock music.’ I was more of a hip-hop and electronic DJ, so I had the skills to make the transitions and everything, but I didn’t have the musical knowledge.”

And what does this mean for DJs? Is this yet another case in which technology will make a career obsolete? Though Morsy admits that even he felt his app’s new matching feature outwitted him sometimes, having such a gigantic library of source material will expand the practice, not kill it.

“Whenever there’s technology that simplifies certain things in an art form, I think it elevates the art form to the next level,” he said. “For example, being able to draw a straight line. When you’re using Photoshop, it removes that skill. You don’t need it anymore. But it allows you to create art on a much higher level, because now you can build 100,000 straight lines very quickly. and by that you can create things that you weren’t able to create before with a pen. Just practicing now a little we came up with lots of crazy ideas.”

Here’s a quick run-through of the new features: 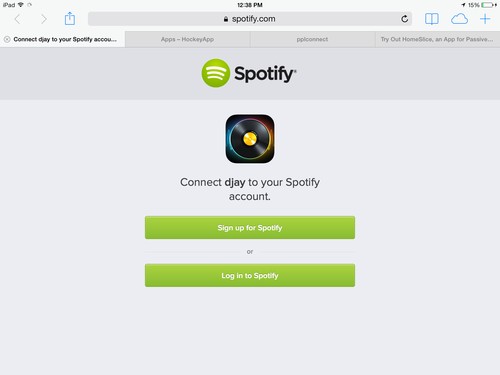 You’ll be brought straight to your digital music-making station. (For illustration’s sake, these screenshots are from the iPad app. The iPhone app is almost identical, except that you have the option to view each disc station individually.)

To access your new music library, tap the musical note icon to the left of the first table. You’ll be asked to log in with your Spotify account so the app can find your playlists and starred songs. 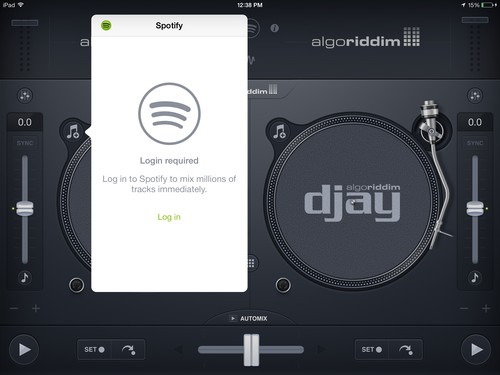 Once it’s processed, you’ll see the two libraries you can choose your songs from: your iTunes library, an option djay veterans always had, and Spotify’s entire cloud-based catalog.

Once you choose your song, djay will load the album art and begin spinning on the first turntable. At any time, you can scratch it, reverse it, or slow it down without any lag. I was skeptical about this at first, as my apartment’s erratic WiFi has made my Spotify streaming stutter in the past. How could it possibly handle this sort of manipulation? But Morsy assured me that he designed the update specifically with this worry in mind. 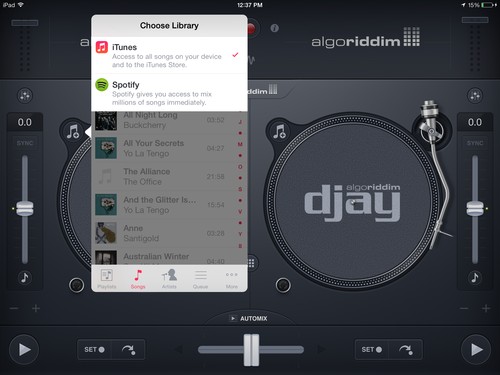 “In theory, the bigger the bandwidth the better,” Morsy said. “But we worked so hard on this technology that even if you’re on the 3G network, it just works like magic.” For the most part, I agree. I was able to test it for about two straight days on a variety of different WiFi networks and my own AT&T service, and the most interruption I experienced was a brief loading wheel when setting a track on the second turntable. 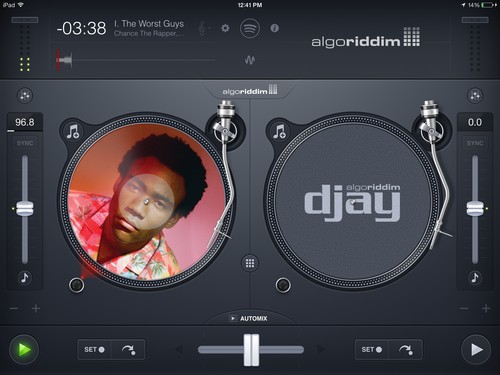 After picking your first song, you can manually choose another track to mix it with (as you always could in djay). Or you can use the app’s new Match tool to automatically analyze and generate a list of music that synchronizes well with your choice.

Here you can see a list of songs the software’s algorithm came up with for one of my favorite Childish Gambino tracks. Sometimes the first result is another song from the same artist (which is sort of boring), but the rest vary in mood and genre somewhat.

I went with “Elevators.” The track automatically loads on the second turntable and begins playing. It’s up to you to sync the track with the first, so their beat counts align. Then — when the moment strikes — move the white bar at the bottom of the screen to the right, slowly fading the first song into the next. 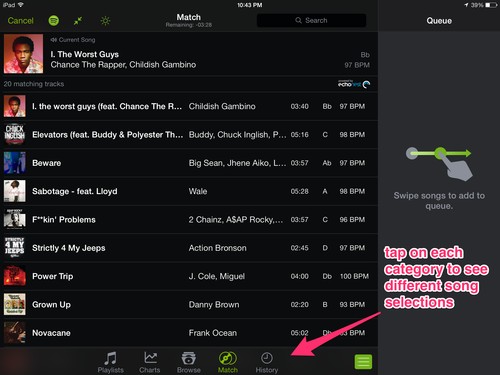 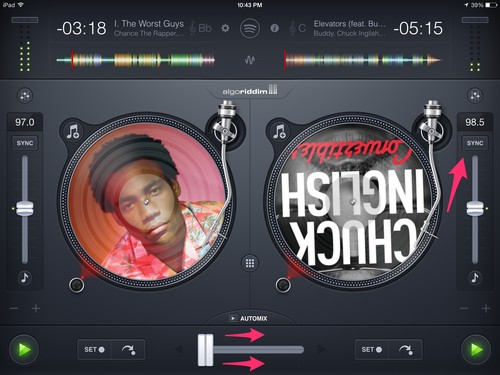 Or, if you really want to go on cruise control, you can start playing a track and tap the Automix option at the center of your setup. From there, you create a set that generates matches from track to track with soft fading transitions. Either that, or it’ll use all of its source music from one of your premade playlists. 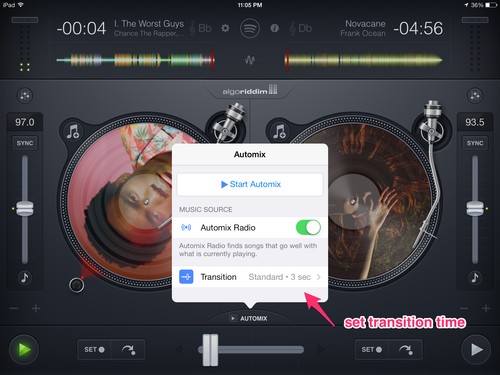 This feature is fantastic for parties, where the pause between songs can sometimes interrupt the vibe. Plus, you know, no need to pay for an actual DJ.

A place for tips, technology, freebies, deals, how-to's, Inspiration and the latest information for Connected Generation.
Previous Free Services That Can Help You Find New Music
Next Facebook Reportedly Working on Snapchat Competitor