Warning: "continue" targeting switch is equivalent to "break". Did you mean to use "continue 2"? in /homepages/43/d336228784/htdocs/PTN2017/wp-includes/pomo/plural-forms.php on line 210
 What’s Twitch? Gamers Know, and Amazon Is Spending $1 Billion on It - PingTheNews™

Home / Entertainment / What’s Twitch? Gamers Know, and Amazon Is Spending $1 Billion on It

What’s Twitch? Gamers Know, and Amazon Is Spending $1 Billion on It

The video in video games is suddenly a billion-dollar business.

Video games have long been something people played. But in the last few years, thanks in part to fast Internet access and multiplayer games, the games have become something that people sit back and watch, too. On Monday, that new habit enticed the web giant Amazon to reach a $1.1 billion deal to buy Twitch, the most popular website for watching people play games.

The deal for Twitch is the latest sign of the way forms of behavior once seemingly on the fringe can, in the hands of tech entrepreneurs, turn into huge online communities in no time. Twitch did not exist a little over three years ago, and it now has 55 million unique viewers a month globally, helping turn games into a spectator event as much as a participatory activity. 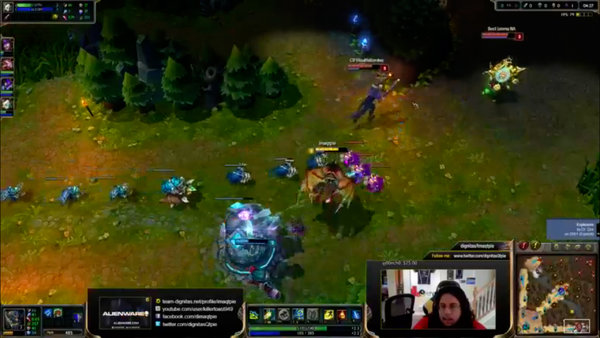 Those millions of eyeballs are valuable to web companies, and Amazon, although usually known for its retailing, is no exception. To win in its bid for Twitch, Amazon had to outmaneuver a who’s who of the tech world, including Google — strongly suggesting that these companies think the era of video-game viewing is just starting. It also underscored Amazon’s growing appetite for controlling and delivering content to digital devices, especially the tablets and smartphones made by Amazon.

A Twitch user, lower right, broadcasts himself playing the game League of Legends.
“Broadcasting and watching gameplay is a global phenomenon,” Jeff Bezos, the chief executive of Amazon, said in a statement, “and Twitch has built a platform that brings together tens of millions of people who watch billions of minutes of games each month.”

Twitch specializes in live videos of people playing games, including regular Joes blasting away in Call of Duty, a popular shooting game, and elite players who earn million-dollar payouts at professional game tournaments. Twitch viewers typically see the screen of a broadcaster, featuring the game being played, along with a video feed of the player’s face and a chat window so they can communicate with the player and others watching the action.

The site has attracted enough viewers to put it among 15 most-trafficked websites around the world, according to data compiled by Sandvine, an Internet networking company. Twitch viewers flock to the site to improve their gaming skills by watching people who have mastered a game or just to get a closer look at games before buying them. Some of the biggest followings on Twitch are of people who are simply amusing, rather than the best players.

Gamers can transmit games over Twitch by using PCs along with consoles like the PlayStation 4 and Xbox One. Twitch says that people watch more than 16 billion minutes of its videos each month. More than 1.1 million unique broadcasters use Twitch to stream video.

The company shares advertising revenue with people who broadcast over its service. While the audiences for many broadcasters are so small they make little money, some broadcasters are said to earn over six figures a year.

The service has dovetailed with the rise of e-sports, as professional gaming is often called. Twitch broadcasts the action from live tournaments for big games like League of Legends and Dota 2. Professional gamers also use Twitch to let spectators watch their practices, inviting them to ask questions about playing techniques.

“Before Twitch, gaming was something you did in the basement in the glow of your monitor,” said David Cowan, a venture capitalist with Bessemer Venture Partners, a big investor in Twitch. “Now it’s something you can do in groups with hundreds and thousands of people.”

It is not clear exactly how Amazon intends to fit Twitch into its eclectic and ever-expanding portfolio of businesses. It could help accelerate the company’s advertising ambitions by giving it a huge video network to pump commercials through. This year, Amazon ad revenue is expected to jump 40 percent, to over $1 billion, according to estimates from eMarketer, a technology research firm.

A place for tips, technology, freebies, deals, how-to's, Inspiration and the latest information for Connected Generation.
Previous Blink Is Watching the House
Next Apple recalls iPhone 5 for battery woes